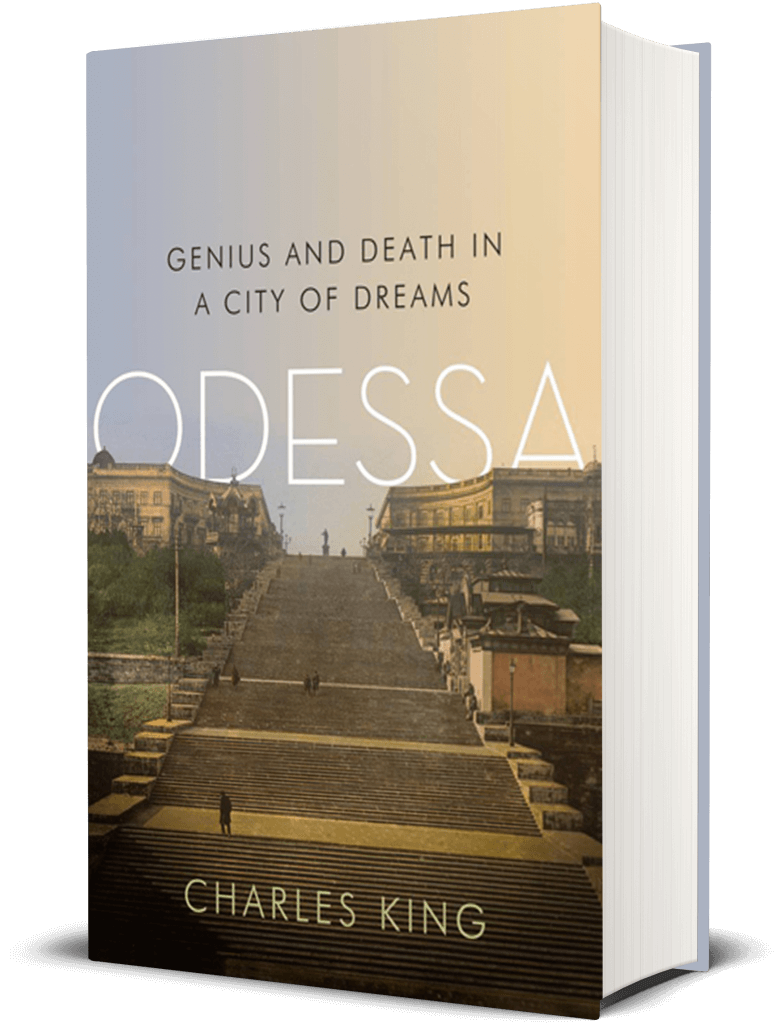 The story of one of Europe’s great cosmopolitan cities — home to many nationalities and religions — and its descent into the heart of darkness during the Holocaust.

Read King’s Q&A on the Book

Italian merchants, Greek freedom fighters, and Turkish seamen; a Russian empress and her favorite soldier-bureaucrats; Jewish tavern keepers, traders, and journalists—these and many others seeking fortune and adventure rubbed shoulders in Odessa, the greatest port on the Black Sea.

Here a dream of freedom inspired geniuses and innovators, from Alexander Pushkin and Isaac Babel to Zionist activist Vladimir Jabotinsky and immunologist Ilya Mechnikov. Yet here too was death on a staggering scale: not only the insidious plagues common to seaports but also the mass murder of Jews carried out by Romanian occupation forces during the Second World War. Drawing on a wealth of original source material, Odessa is an elegy for a vibrant, multicultural city as well as a celebration of the survival of Odessa’s dream in a diaspora reaching all the way to Israel and the United States.

When the Soviet army marched into the port city of Odessa in the muddy spring of 1944, Soviet officials counted forty-eight Jews living there. Three years earlier, there had been more than 200,000. The deportation and killing of the city’s large Jewish population—a third of the total at the outbreak of the Second World War—was the darkest chapter in the life of one of the preeminent centers of Jewish culture in Europe. Part vivid history, part collective biography of a legendary city’s makers, destroyers, and rebuilders, Odessa: Genius and Death in a City of Dreams uncovers the hidden stories of a city eternally poised between flourishing and self-destruction.

Odessa was the Russian Empire’s gateway to the Middle East, its foremost commercial port, and home to one of the most progressive and successful Jewish communities in all of Europe. When Mark Twain visited, he found its vibrant mix of nationalities, religions, and social classes to be America in miniature. Created as a model of enlightenment by Catherine the Great and her colorful paramour Grigory Potemkin, Odessa grew as a haven for Russians, Jews, Ukrainians, Greeks, Italians, and others seeking fortune and adventure at the meeting place of empires. Its reputation for feisty dissenters, artful raconteurs, and good-natured crooks cemented its place among Europe’s great cities.

But in the twentieth century, the city of creative strivers started down a long road toward ruin. Pogroms devastated the Jewish community. The Russian civil war brought refugees and new rulers, the Bolsheviks. During the Second World War, the occupation government of Nazi-allied Romania killed tens of thousands of Jews in one of the untold episodes of the Holocaust.

Through the story of its geniuses and villains, Odessa presents a searing portrait of a city teetering between greatness and suicide.

Characters both famous and obscure bring the story to life: the writer Isaac Babel and the visionary governor Mikhail Vorontsov; the poet Alexander Pushkin and the fictional kingpin Benya Krik; the Zionist radical Vladimir Jabotinsky and the filmmaker Sergei Eisenstein; the eccentric scientist Ilya Mechnikov and the antisemitic bureaucrat Gheorghe Alexianu. The book follows Odessa’s saga from the real Potemkin to the groundbreaking film Battleship Potemkin, with its unforgettable climax on Odessa’s world-famous outdoor staircase.

Based on new research in archives, libraries, and the streets of Odessa itself, Odessa traces the travails of the city’s uneasy cosmopolitanism—from Babel’s beloved short stories to the boardwalk of Brighton Beach, Brooklyn’s “Little Odessa” and home to generations of Russian and Jewish immigrants. Odessa reveals the dark threads running through the history of one of Europe’s most intriguing and exasperating cities, the object of patriotic devotion to its inhabitants and its global diaspora. Evoking the leafy courtyards and acacia-lined streets, the synagogues and churches of a vanished era, Odessa shows the everyday challenges of being multicultural, as well as the native know-how that managed to transform a city of many ethnic groups and religions into more than the sum of its parts.

[Odessa] begins as an evocative celebration of the port on the Black Sea, but it unfolds as an elegy, a moving and lyrical epitaph to what was and what is… Rich and riveting, complex and compelling, powerful and poetic.

Scholarly and fascinating … King relates all these horrors with calm and sorrowful restraint.

[A] finely written and evocative portrait of the city… It is [the] detail, coupled with a fine feel for the sweep of history, that make this book a worthy tribute to one of Europe’s greatest and least-known cities.